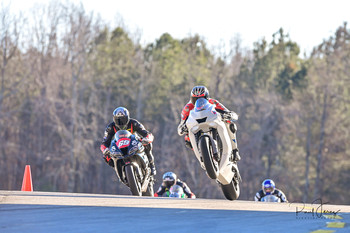 I've been into photography since 1972, when I got a Polaroid SX-70 for my 10th birthday.  Ever since then I have been intrigued by capturing moments in time through photography.  I've enjoyed all types of photography these past 50 years but, my preference has always been to shoot moving things from people to machines.  More on that later.

Through the years I've owned several film and digital cameras including Minoltas, Sony (Mavica), Canons, and Nikons - which I've been shooting since 2007.  I've stuck with Nikon primarily for the image quality, particularly dynamic range, their build, which allows me to almost drive nails with my cameras, and their ergonomics, which are just better for me personally.

Aside for photography, my second life passion is motorcycles.  My first 2-wheeled vehicle was a Garelli moped, which I got for my 14th birthday.  I proceeded to modify it and through porting, pipe and jet mods and gearing, achieved 55mph, which was pretty good since it was only supposed to do about 30!  a couple of years later I got my first real bike, a Yamaha RD-400 Daytona Special.  It unfortunately got stolen about a year and a half after I got it and I went up to a Kawasaki KZ-650.  Over the many years that followed, through marriage, kids, and life in general, I owned several other bikes including several other RDs, Kawasaki triples, an SV and an Aprilia RS250.

In 2011, a good friend asked me to come to TGPR to shoot pictures from the public areas, which I did and really enjoyed despite the distance limitations.  It was an X-Act Motorsports track day.  Right about that time, my wife had made a statement to me to the effect that, "if you're gonna keep buying expensive photo gear, you better start making money at it."  Right then and there the light bulb came on and my strong desire to shoot track events was born.

Not long after that day, Pete Xenakis asked me to shoot more X-Act events.  In addition to that, I added WERA events which gave me the opportunity to watch some really good racing while capturing those moments.  Over the years that followed, I was asked by N2, TDW Motorsports, and PRE to shoot their events.  Along the way I've also shot some CCS, MotoAmerica and other private events and have enjoyed every minute of it!

My mission is to provide the highest quality photos at an affordable price.  What does that mean?  Well - I always approach it like this:  There are three attributes to track photos but you can only ever get two.  The three are GOOD, FAST, and AFFORDABLE.  Sure - other photographers will get your photos in your hands at the track the day they are shot (FAST) but they're either not going to be AFFORDABLE or they're not going to be GOOD (or at least good by my standards.)  I am willing to lose some sales to provide you the best quality photos at an affordable price.

Highside Photo specializes in events photography - primarily motorsports and especially motorcycle roadracing. We are proud to photograph events for top tier organizations such as N2 Track Days, Performance Riding Experience (PRE), Trackapalooza/Track Day Winner, Kern Track Days, WERA, MotoAmerica, CCS, and others. Our goal is to provide you high-quality photos at a fair and reasonable price. Our commitment is for our customers to be fully satisfied and we offer a money-back guarantee in the event you aren't.

All photos on this site are property of Raul Jerez / Highside Photo. Do not link directly to these photos or take screenshots of these photos in order to circumvent purchase.

Purchase of photos for personal use entitles the buyer to unlimited distribution of the photo, either electronically or in print, so long as the photo is not used in a for-profit publication. Use of the photo in a commercial, for-profit publication or in any other way resulting in financial gain for the purchaser, publisher, or user of the image, requires a commercial license unless specific permission has been obtained from Raul Jerez / Highside Photo.